What is all the Buzz about???

My husband calls me Camper Crazy because I have been nagging him for the past 3 years to buy an RV.  I keep pitching the idea that we should live full-time in an RV when we retire… just a few years away!  However, he thinks I am Crazy…Irrational…and just plain NUTS!  My husband is a … END_OF_DOCUMENT_TOKEN_TO_BE_REPLACED 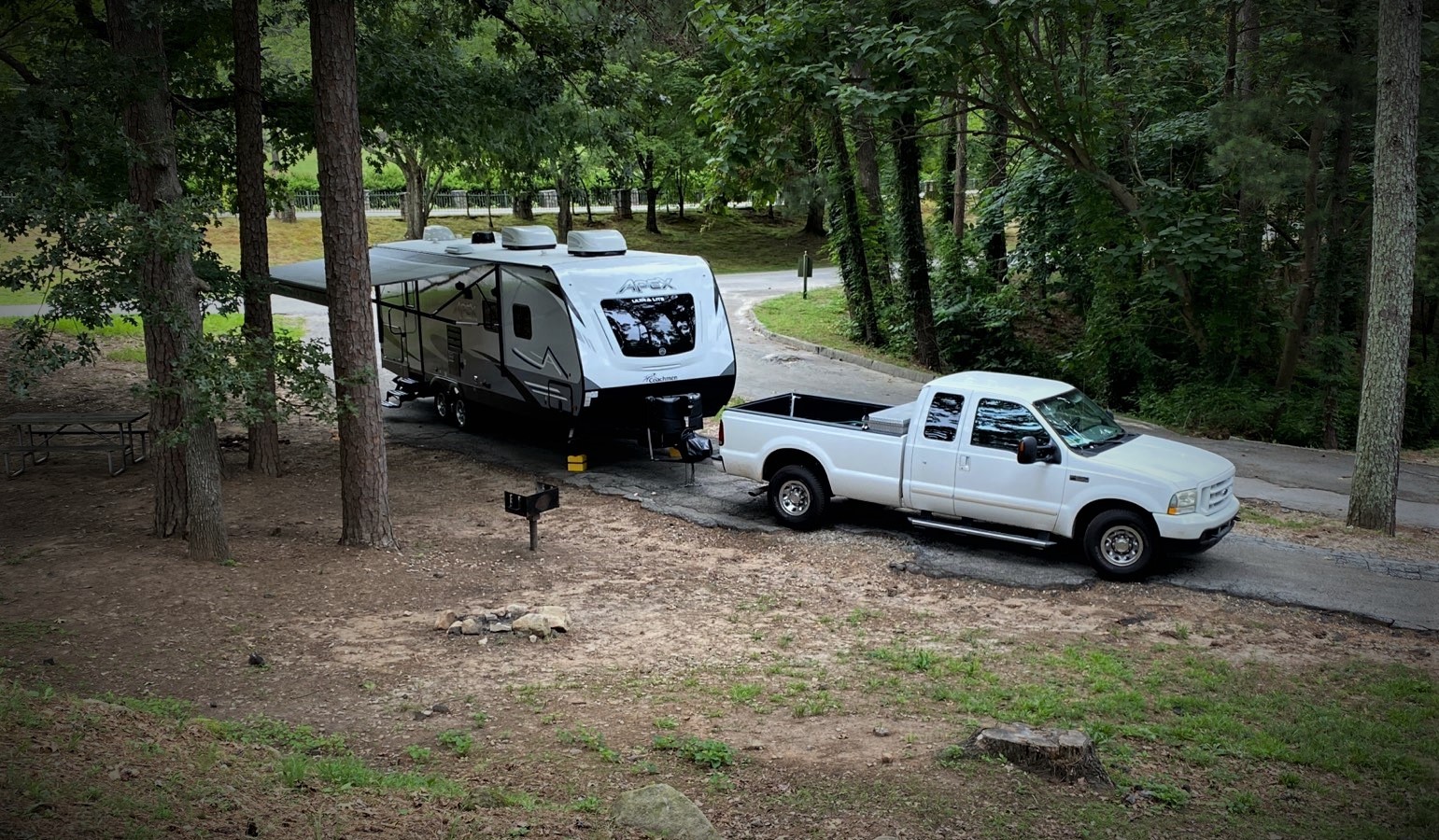 This site is dedicated to all things camping, glamping and RVing… We are Mark and Emily, married 45 years…and yes, all that time to each other! Reaching another phase in our life, it is time for another adventure. Unfortunately, we are at a by-pass and not sure which direction to go…. we may be… OMG … END_OF_DOCUMENT_TOKEN_TO_BE_REPLACED

I have to say, when traveling across the country pulling 40’ behind you a myriad of things can go wrong. And sometimes they do. Fortunately, as of the time of this writing, it’s been relatively smooth driving. The weather has been fairly cooperative as well.

While I think it’s great that some people who travel have their plans scheduled out a year or months in advance—our family has never traveled like that. That does limit us sometimes when it comes to campgrounds. Many times the nicest ones are booked so you end up calling and hoping they had a cancellation or settling for what you can find. If we’re just stopping overnight it matters little to me (as long as it’s a safe area) what the campground is like, as I have MY home on wheels, which we love, so as long as we have full hookup or even just water and electric I’m happy. Now this kind of traveling isn’t for everyone, it’s just how we do things.

Our drive from mid Nebraska to Cheyenne went well. We stopped at the KOA Cheyenne https://koa.com/campgrounds/cheyenne/?utm_source=campgroundreviews.com&utm_campaign=RVLife_Campgrounds&utm_medium=referral for the evening. I would stay there again. We have found that sometimes the KOA’s are hit or miss. Some are quite nice and others—well, they leave a lot to be desired. There’s approximately 500 of them around so probably if you’ve traveled for any length of time you’ve stayed in one or two. Most of them offer different amenities (for instance the one in Cheyenne had a fenced in dog park, mini golf, a pool, horseshoes, etc.) which is great. Typically we don’t partake of many of the amenities, but they are there if we decide to. They can also be a little pricier than a different campground in the same area—so just do your due diligence and check out the reviews.

After one night at the KOA we were off to Montpelier, Idaho. Yes, Idaho. But no worries we had reservations for a site in Alpine, Wy for a few days next so it was literally a stop over point. There we stayed at a KOA https://koa.com/campgrounds/montpelier-creek/ as well…..mostly because there isn’t much else in the area. While there wasn’t anything wrong with it, this one seemed a little more run down than the one in Wyoming. While it was completely filled it didn’t have the same vibe as the one in Cheyenne. It felt a little older and the sites could use a little updating. But for one night it was fine. There was a nice little walking trail that bordered a creek and had wild roses growing nearby which was a lovely 20 minutes spent.

You’re also close to the Oregon trail center, which I think would be super informative and educational to visit. Maybe next trip.

The drive between Cheyenne and Idaho was pleasant. I enjoy driving through Wyoming and in all honesty it’s one of my favorite states. The variety in landscape is quite amazing. Eastern Wyoming I would consider an extension of Nebraska. Flat and kind of desolate. One interesting features we saw on rte 80 in Wyoming were the vedauwoo rocks. This is shortly after you leave Cheyenne. People come from all over to rock climb these structures and camp nearby.

There’s a lot to see in Wyoming if you have the time. I will say something that can be frustrating (to me at least) is when you’re traveling with a huge 5th wheel you can’t always stop and see things you want to on a whim. Many times I’ll see something and want to stop but we’re limited by our size and parking—or maybe just the route—so I make a note and will try to make plans to see it next time when we can stay closer. So I would say that’s one of the down sides to driving such a big rig.

So after a few days of driving we made it to Wyoming. What will we decide to do next?